December 10, 2020. Chief Scientist of GC RAS, Chairman of Scientific Council of RAS on the study of the Arctic and Antarctic, academician A. D. Gvishiani spoke at the plenary session of the X International forum "Arctic: present and future" about: "Big Data in the perspective of the Arctic research".

The Forum was held on December 10-13 with the support and participation of the Federation Council, the State Duma of the Federal Assembly of the Russian Federation and the State Commission for the Development of the Arctic. The event brought together representatives of relevant federal ministries and departments, regional authorities, commercial companies and research organizations, and the media. The organizer is the Interregional Public Organization "Association of Polar Explorers" (ASPOL).

The organizing Committee is traditionally chaired by the President of ASPOL, special representative of the President on international cooperation in the Arctic and Antarctic, corresponding member of RAS A. N. Chilingarov.

When studying the Arctic, it is necessary not to operate with separate models of some phenomena, even if they are extremely important, such as gas and oil production, but it is necessary to move to a whole picture of the collection, accumulation, and processing of knowledge about the region. It was the key point of Alexei Gvishiani’s presentation. According to him, the Arctic develops in four directions: the development of deposits of strategic metals, gold and diamonds; production of about 80% of Russian gas and, due to new scientific discoveries, an increase in production; production of mineral fertilizers and development of the Northern Sea Route as a single infrastructure.

"These noble and important tasks ensure the growth of Russia from the North, as the President predicted. But are they the mainstream of scientific development? In the future, we should not operate with separate models, we should move to a holistic picture of knowledge about the Arctic and make the Arctic a source of big data. We could start studying the Arctic as a single and diverse element".

The discussion program of the forum included discussion of social and economic issues, science and technology, transport, industry, communications and digital technologies, ecology and security of the macroregion.

The main outcome of the forum will be a resolution that will be sent to the Government of the Russian Federation, the State Commission for the Development of the Arctic, the relevant committees of the upper and lower chambers of the Federal Assembly to improve legislation and state regulation in the field of sustainable development of the Arctic zone of Russia. 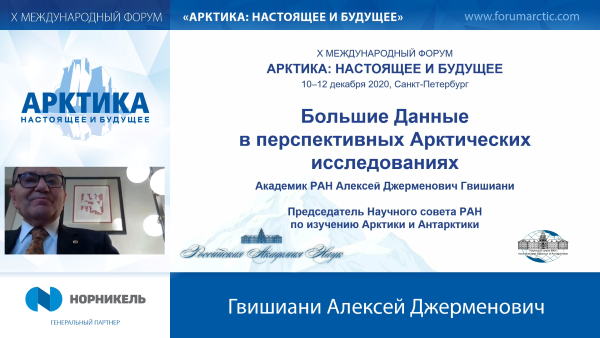