The theme of the forum this year was: "The development of scientific research and the economy of the Arctic." The organizers were the Free Economic Society of Russia, the Scientific Council of the Russian Academy of Sciences for the Study of the Arctic and Antarctic, the International Union of Economists.

The event was attended by leading scientists and experts, representatives of state authorities, international and national public organizations, administrations of the constituent entities of the Russian Federation, and the business community.

The forum participants were welcomed by Academician-Secretary of the ONZ RAS A. O. Gliko, Ambassador-at-Large of the Ministry of Foreign Affairs of the Russian Federation N. V. Korchunov, Head of the UN Environment Program Office in Russia V. V. Moshkalo.

Commenting on the work of the forum, the President of the All-Russian Public Organization Free Economic Society of Russia (VEO of Russia) S. D. Bodrunov noted:

“The future of Russia and its well-being largely depend on the sustainability of the socio-economic development of the northern territories. Last year, on the initiative of the Chairman of the Scientific Council of the Russian Academy of Sciences for the Study of the Arctic and Antarctic A.D. Gvishiani, the first major international scientific conference dedicated to solving the problems of sustainable development of the Arctic took place within the walls of the House of Economist. The event received a fairly wide response in expert and scientific circles. Based on its results, an information report was prepared, which we sent to the Ministry of the Russian Federation for the Development of the Far East and the Arctic and to other specialized departments, including the UN. Today, at the Arctic Academic Forum 2022, the discussion of a wide range of issues continued.” 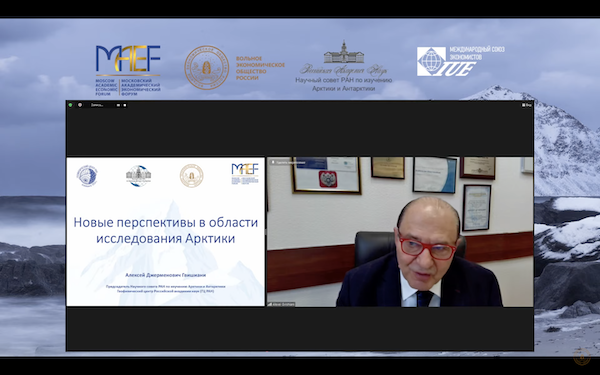 The working part of the event was opened by the report of the Chairman of the Scientific Council of the Russian Academy of Sciences for the Study of the Arctic and Antarctic A. D. Gvishiani “New Perspectives in the Field of Arctic Research”.

“The Arctic Academic Forum is important in order to understand how we see the development of the Arctic from the point of view of geosciences,” said Academician Gvishiani.

The following topics were also covered on the forum:

All materials presented at the forum will be included in a special section of the publication "Proceedings of the VEO". The submitted reports will be published in the form of a thematic brochure "What to do" for presentation to all interested authorities and business structures. Also, the results of the forum will be considered during the work of the MAEF in May 2022.